Dorsett Hospitality International, the group who renovated the old Shepherd's Bush Pavilion and have turned it into a successful upscale hotel, opened their doors on January 26th for a public consultation on their revised proposals for the old Walkabout pub, formerly the Shepherd's Bush Cinematograph theatre.

Having had their planning application for a new high-rise tower turned down last year, Dorsett have now taken a much more sympathetic approach to the site, incorporating the historic facade into the new proposed building (see above and below). Depending on the public response to the new plans, Dorsett may or may not apply for formal planning permission.

The revised proposals for the old Walkabout have been designed by Flanagan Lawrence Architects, who were responsible for the award-winning restoration of the Dorsett Hotel.

The new proposal is considerably lower at the front and rear than the previous tower, and it will retaining parts of the existing building, mainly the facades. They also plan to have an upscale cinema in the basement, along the lines of Notting Hill Gate's Electric Cinema. (see below), which would maintain the historic purpose of the building as a place of entertainment.


The new building will provide an extension to the existing Dorsett Hotel, allowing them to expand their ground floor restaurant considerably. The restaurant will open up onto Rockwood Place, which is at present a rather dark alleyway that doesn't exactly invite pedestrians.  All this will change if the plans go through.

Dorsett proposes to "significantly improve the Rockwood Place environment" so that it "provides a safe, secure and attractive pedestrian route from Pennard Road to Shepherd’s Bush Green".

The new tower will be exactly the same height as the Dorsett (see below), so it will fit more harmoniously into its surroundings than the previous proposal. It is also designed to grow naturally out of the old building, using the existing structure as a "plinth" from which the new tower will rise. 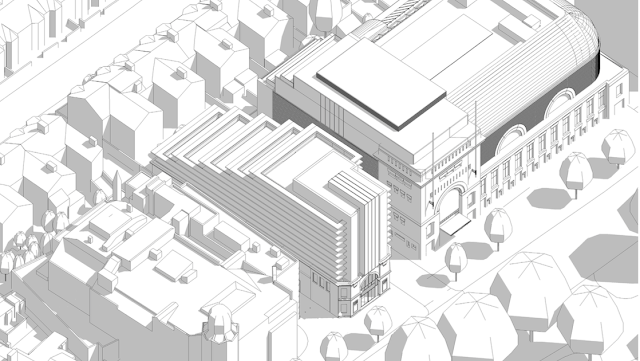 Traditionalists and admirers of historic architecture will no doubt welcome these new plans, but might also note that the tower itself is unabashedly modernist in style. It grows from, but isn't really in keeping with, the Edwardian Baroque style of the old building, or the two listed buildings which flank it.

In our view, the architects could do more to incorporate historic elements into the new structure, creating more visual harmony with its neighbours, especially at the upper levels, which could draw more from the visual elements of the Dorsett Hotel, a handsome building which has been very sympathetically restored.

But one thing we can all agree on is that having old buildings boarded up does no one any good, and it is surely a good thing to find a new, effective use for this historic space.


The Bush Telegraph offers a personal view on life in Shepherd's Bush. If you would like to contribute a story about our neighbourhood, email us at shepherdsbushblog@gmail.com.
Posted by The Bush Telegraph at 06:41