Congratulations to local MP Andy Slaughter, who has defied his party's national setbacks in yesterday's general election and been re-elected to the constituency of Hammersmith with a convincing majority.  It is testimony to Andy Slaughter's skills as a politician that he has again increased his share of the vote, this time roughly doubling it to win an impressive 50% share, more than enough to bring him home to victory.

Thanks to the Wikipedia, you can see in the chart below the changes in the share of the vote since 2010. Tory candidate Charlie Dewhirst increased his share by a couple of hundred votes, but not by nearly enough to win.

UKIP and the Greens both made a respectable showing, increasing their share considerably since 2010. But the big story in Hammersmith was - as elsewhere in the country - the huge collapse in the LibDem vote, with Millicent Scott winning just 2,224 votes, barely more than the Greens or UKIP. Most of the LibDem voters appear to have swung towards incumbent MP Andy Slaughter. 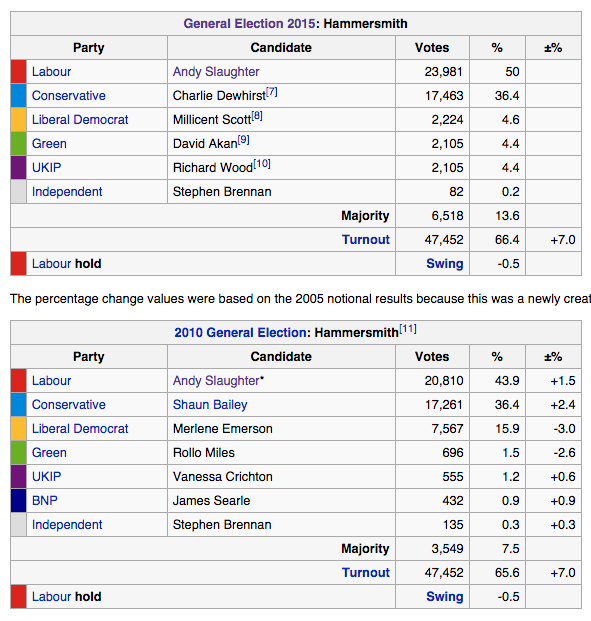 Whatever your politics, there is no doubt that Andy Slaughter is a dedicated and committed MP. I have heard him speak - he is eloquent, passionate and committed to his constituents. We congratulate him on his victory and wish him the very best of luck in representing the people of Shepherd's Bush to the very best of his ability.

The Bush Telegraph offers a personal view on life in Shepherd's Bush. Read about the Campaign to Save Hammersmith Park, find out about our new Farmer's Market, see what's on at The Bush Theatre, find out the latest news on the future of Shepherd's Bush Market, and the Council's plans to upgrade the Goldhawk Road and the Uxbridge Road. If you would like to contribute a story about our neighbourhood, email us at shepherdsbushblog@gmail.com.

Posted by The Bush Telegraph at 03:07