Review - Boys Will Be Boys 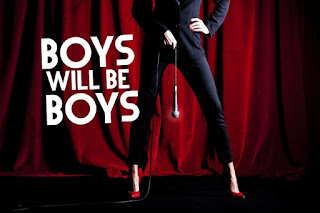 Here at The Bush Telegraph we're big fans of the Bush Theatre, our temple of culture on the Uxbridge road, currently undergoing a major renovation.

Overall, the standard of theatre is very high, comparable with the best of the West End, but lately we've noticed a bit of a detour into some less thoughtful programming. Think the naughtily-titled "F*ck the Polar Bears", or "Islands", a potty-mouthed rant against tax avoiders. It's not that these plays don't have something to say, it's just that what they do say isn't necessarily very well said.

"Boys Will Be Boys" continues this recent trend. Here is what our reviewer thought of the play, which is currently playing at Bush Hall until 30 July.

Cheap. Cheap. Cheap. I wouldn’t waste your money on ‘Boys Will Be Boys’ on at Bush Theatre/Bush Hall right now. What do you do when you run out of gags about City Boys? We all know that stereotype, and it took about half an hour to run through the tired jokes.

And then there were the shock-'em-into-attention references to rape, paedophilia, incest, racism, and the rest. At that point I crossed my arms and struggled to resist the urge to leg it out of the fire escape. Just because all the actors were women, doesn’t mean it isn’t a deeply sexist play. It’s sexist against men. And also women.

And it isn’t actually deeply anything, much. "Boys Will Be Boys" offered no interesting ideas or any kind of resolution of the problems of a male-dominated finance economy. And the play was, to quote my friend, unquestionably “nasty” and “nihilistic".

When it all became too distasteful, I started looking around the audience to see their reaction.  The (mostly) young people seated near me were all wide eyed with interest. I think they thought it was 'brave'. But it wasn't, it was just stupid.

The Bush Telegraph offers a personal view on life in Shepherd's Bush. If you would like to contribute a story, email us at shepherdsbushblog@gmail.com. And don't forget to add your opinion in the comments section below.
Posted by The Bush Telegraph at 01:29