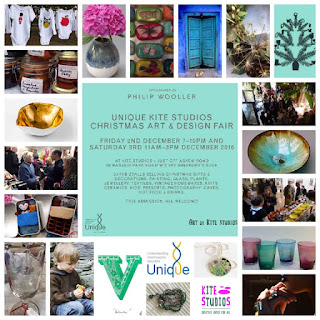 So come along on December 2nd and 3rd, stock up on Christmas gifts, and get involved with your local community - all in a good cause.

What's this all about?
It's the 10th annual Unique Christmas Art & Design Fair.

Email ThisBlogThis!Share to TwitterShare to FacebookShare to Pinterest
Labels: Christmas, Entertainment, Events, Families, Kids, Kite Studios, Stuff To Do, Things to do

Bush Theatre "To Fight Right Wing" When It Re-Opens

Here at The Shepherd's Bush Blog we've long been big fans of the Bush Theatre on the Uxbridge road, currently undergoing a major renovation.

Lately though we've noticed a bit of a detour into some less entertaining and more obviously political programming. Think the potty-mouthed "F*ck the Polar Bears", "Islands", a sweary rant about tax avoiders, or "Boys Will Be Boys", a cliche-ridden polemic about sexism in the City.

And now, it's official. The Bush Theatre artistic director Madani Younis has vowed - not to put on great theatre entertainment - but to "fight the right wing" when the building re-opens.

Trouble is - Is this what audiences want? And should public money be spent on such an overtly political goal?

Westfield Sparkles For Christmas, But No Lights For Our Streets

Every year, the Westfield shopping centre puts on a fine light show at Christmas. Their decorations are impressive, their Kung Fu Panda-themed grotto will surely pull in thousands of children, and they even host an ice rink.  But the sparkle at Westfield just underscores how dowdy the shopping streets in Shepherd's Bush are by comparison.  Where are the lights and decorations on the streets of Shepherd's Bush, and why can't our Council put up a few lights and some tinsel?

Earlier this year, some long-overdue repairs were carried out by our local Council, The London Borough of Hammersmith & Fulham, to the Children's Playground in Hammersmith Park, which had been in a state of disrepair for some time.

A company called Valley Landscape Management put up fences around the damaged climbing mounds and repaired much of the torn material.

But, more than six months on, the job still isn't complete. So why won't our Council fix the playground at Hammersmith Park? 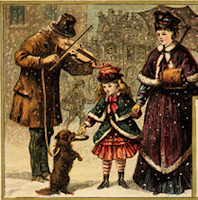 On Sunday 11th December St Stephen's Church on the Uxbridge Road is hosting an "inclusive carol concert" welcoming all families - including those who have children with special needs.  It's a very informal event; there is no need to book ahead and all are welcome.

The event is part of the excellent community work done by St Stephen's; a church with a commendably broad and diverse congregation, welcoming people for all parts of our neighbourhood.

The service starts at 4pm. After the service there will be mulled wine and mince pies.

Read more »
Posted by The Bush Telegraph at 04:58 No comments:

The new buildings will be called Gateway West, Gateway Central and Gateway East.

So, no slowdown in the pace of growth and new development in our neighbourhood then.

Read more »
Posted by The Bush Telegraph at 01:08 No comments:

Never mind Brexit, the fall in the value of Sterling, punishing increases in Stamp Duty, slowing economic growth and a Trump presidency.  Despite all the headwinds, Shepherd's Bush House Prices just keep on getting sillier. Recently a house was listed for a breathtaking £3million in Macfarlane Rd, a fairly average street of Edwardian terraced housing which sits just west of Westfield and south of the new TV Centre development. It's hard to imagine prices like these in our neighbourhood. Will Barnard Marcus get £3million - or even close - for a relatively modest Edwardian three story house?

Read more »
Posted by The Bush Telegraph at 02:03 No comments:

Last week the developers of Television Centre on Wood Lane held a meeting for local residents - to give the community an update on the progress of this massive development.

At the meeting were representatives from Mace (builders) and Stanhope (developers), including Mace community liaison representative Mike Russell.

At the meeting, residents were told that the development is currently on track to complete Phase One by the end of next year, though at present Phase Two now has no fixed timetable for completion.  So, what's going on at TV Centre?

Read more »
Posted by The Bush Telegraph at 01:42 No comments:

Shepherd’s Bush Post Office, famously described by Richard Herring as "the portal between Earth and Hades" looks set to close, and re-open somewhere else in our neighbourhood.

The Hoxton Hotel Group has purchased the site, with plans to develop it into an upscale hotel, no doubt building on the success of the Dorsett Hotel Group next door.

The Post Office are now consulting with the public on a new proposed site. The two options appear to be W H Smith in Westfield or the W12 Shopping Centre.

TFL Open Day on 14 and 15 November at TVC Pavilion

TFL are inviting Shepherd's Bush residents to a public exhibition of plans to transform the disused railway arches below and adjacent to Wood Lane Tube station, which will be turned into retail and commercial units.

The newly restored arches "will provide new jobs and opportunities for businesses and deliver revenue to be reinvested into the transport network."

Read more »
Posted by The Bush Telegraph at 07:04 No comments: