Dorsett Hospitality International, the group who renovated the old Shepherd's Bush Pavilion and have turned it into a successful upscale hotel, opened their doors on January 26th for a public consultation on their revised proposals for the old Walkabout pub, formerly the Shepherd's Bush Cinematograph theatre.

Read more »
Posted by The Bush Telegraph at 06:41 No comments:

In particular, Slaughter remembers the actor as "As a West London boy, Labour Party loyalist and supporter of the arts in his local community".

Both men were educated at Latymer Upper School in Hammersmith, then a grammar school. Alan Rickman was a staunch supporter of our very own Bush Theatre, promoting high quality writing and drama in our neighbourhood. To read the full story, follow this link.
Posted by The Bush Telegraph at 01:08 No comments:

Councillor Harry Phibbs has recently posted some information at his excellent blog on how to host a street party in Shepherd's Bush to celebrate the Queen's 90th birthday, on 12 June 2016.

Interested in having a party, but not sure how to do it? Our Government is keen to promote street parties, and they have now published guidance on how to hold one, setting out all the dos and don'ts.

In our neck of Shepherd's Bush we had a street party back in 2011 to celebrate the Royal Wedding.  It was fun, and it was also a chance for many of us to meet our neighbours, often for the first time. Below, thanks to Harry, is a brief guide to How To Host a Street Party.

Council Tax in Shepherd's Bush Frozen For Another Year

Our Labour Council recently issued a press release stating that they intend to freeze our local Council Tax at current levels this financial year.

This is surely good news for local taxpayers, though the move was criticised by the Conservative opposition, who argue that by holding Council Tax at current levels, LBH&F have "broken their election promise to cut council tax".

Read more »
Posted by The Bush Telegraph at 01:30 No comments:

Public Exhibition of Revised Plans for the Walkabout: Tuesday 26th January from 2.00pm to 8.00pm

Dorsett Hospitality International, the group who renovated the old Shepherd's Bush Pavilion and have turned it into a successful upscale hotel, are opening their doors for a public consultation on their revised proposals for the boarded-up ‘Walkabout’ pub, formerly the Shepherd's Bush Cinematograph theatre.

Having had their planning application for a new high-rise tower  (see left) turned down last year, Dorsett have now taken a much more sympathetic approach to the site, incorporating its historic facade into a smaller new tower.
Read more »
Posted by The Bush Telegraph at 04:01 No comments:

Pity the poor Shepherd's Bush Empire. At the end of last year they discovered structural faults in their roof, and the venue is to remain closed until March 31st at the earliest.  Cancelled gigs include They Might Be Giants, Gabrielle Aplin and Ed Byrne.

All these acts have been been moved to other London venues. If you have a ticket to one of these events you will still get to go - but not in Shepherd's Bush. Complicating the repairs is the fact that the Empire is Grade II listed - which means that the existing fabric of this early Edwardian building has to be maintained as it is.

Posted by The Bush Telegraph at 01:56 No comments:

Remember the Night Tube? It was supposed to come into force last September, but due to strikes by Tube drivers, it was postponed for further talks between management and unions.

Now, drivers say they will strike again.  To see the full story, go to the BBC website here.

Posted by The Bush Telegraph at 00:58 No comments:


In December we reported on the collapse of a roof above the pawnbroker at 2200 Uxbridge Road, which injured a pedestrian and covered the area in debris. Now you can see the footage of the collapse in real-time. Fortunately, the unlucky chap who was passing at the precise moment of the collapse does not seem to have been seriously injured.
Posted by The Bush Telegraph at 06:37 No comments:

It's a funny business, politics. Recently we reported on how our Labour-controlled Council is set to privatise Council housing in Shepherd's Bush, a policy normally associated with the Conservatives.

By contrast, Chancellor George Osbourne's war on landlords, and his huge hikes in Stamp Duty, look suspiciously like Labour party policies.  But it still comes as a shock to find our Government waging a new war on small businesses, by forcing self-employed people to file their taxes no less than four times a year.

This massive new increase in red tape (not to mention accountancy costs) comes into force in 2020, and will damage precisely the people who the Conservative party traditionally supports - aspirational small business owners and entrepreneurs.

Read more »
Posted by The Bush Telegraph at 05:55 No comments:

New Plans To Be Submitted to Demolish Shepherd's Bush Palladium 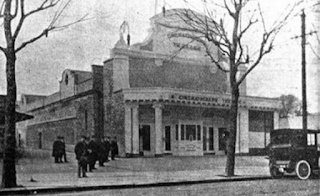 The Shepherd's Bush Palladium, more recently known as the Walkabout Pub, was saved from demolition back in May 2015.

At the time, our Council rejected Dorsett Regency's plan to demolish the historic cinema and turn it into a 16 storey block of flats.

According to the Hammersmith and Fulham Historic Buildings Forum, new plans have been proposed, currently in the pre-application stage, which still involve demolition of much of the building.

Read more »
Posted by The Bush Telegraph at 05:22 No comments: