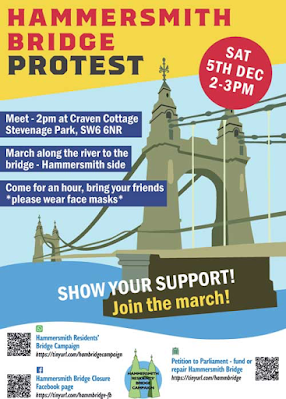 The bridge is to remain closed indefinitely, as our Council, TFL and central government argue over who should pay.

When will the bridge re-open? It has been closed since April 2019, following a long and sorry saga of temporary closures and regular postponement of the necessary repairs.
If you're fed up with the endless delays and prevarications and would like to see our council do something about repairing the bridge (which they own), then show up and let your voice be heard.
Hammersmith Bridge Protest Saturday 5th December
The event is organised by The Hammersmith Residents Bridge Campaign.
Where and When
Protesters should meet at Craven Cottage in Stevenage Park on Saturday 5 December at 2pm. The plan is to march along the river to the bridge on the North (Hammersmith) side of the river.  Come along for an hour, bring your friends, and please wear masks please.
According to the organisers:  "Our council has failed us. Hammersmith bridge is broken due to a lack of maintenance. The council owns the bridge and has to pay towards its repair. It is refusing to contribute. It has made no progress towards repairing the bridge in the months since it was closed.  This has caused huge problems in the borough.  We have awful traffic jams as vehicles have to go via Chiswick or Putney to cross the river.  People can’t easily get to work, school or hospital with the bridge shut.
Come and show your frustration and disappointment at this failure. Bring friends."
Hammersmith Bridge
Hammersmith Bridge - Closed for Good? According to an article in July in the London Evening Standard, Hammersmith Bridge "may be shut to drivers for good" as the repair bill for the ailing structure nears £100m.

Hammersmith Bridge is a major traffic artery for thousands of Londoners, and the closure has forcibly re-routed six bus routes. LBHF say that they have no money for repairs, but there are two simple ways that the money could be raised:

Toll Bridge
The first and most obvious solution is to levy a toll. Tolls pay for bridges all over the world, and even Hammersmith Bridge began its life as a toll bridge.

A charge of as little as £1 would, assuming 20,000 vehicles a day for 365 days,  raise over £7 million per year - a more than adequate income stream to secure commercial financing.

By way of comparison, the Batheaston toll bridge in Bath charges 80p and the Clifton suspension bridge charges £1 (it increased from 50p in 2014). Tolls are very democratic - anyone who doesn't want to pay could use another bridge, or walk.

Sell some assets
The second easy solution for LBHF would be to sell some valuable assets that serve no purpose, such as the Cecil French collection, a collection of Victorian artwork that is not on display, cannot be seen by the public, and costs money to archive and insure. To see our proposed solution for how LBHF could raise the cash to solve this (and many other problems), follow this link.

The Shepherd's Bush Blog offers a personal view on life in Shepherd's Bush. If you would like to contribute a story about our neighbourhood, email us at shepherdsbushblog@gmail.com
Posted by The Bush Telegraph at 07:24