Shepherd's Bush police station is not the most beautiful building in our neighbourhood. A 1960's-style concrete block on the Uxbridge Road that makes Moscow's Ljubljanka seem friendly and welcoming, our local cop shop has not been improved by the closing of the public counter back in 2013.

In other words, the one thing you need from a local police station - the ability to report a crime - is now not possible. So, what exactly is it for, then? 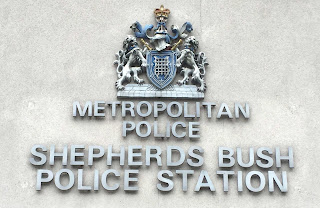 That was a question that I asked the police back in 2013 at a local Ward Panel meeting where I first learned that the public counter at the station was to be closed. "But how", I asked, will people report crimes?". "Oh", said the policeman - "we'll come to you".

It was such a reasonable and clear answer that I didn't know what to say, and the meeting soon moved on to other things.  It was only later that I realised how unhelpful this was. Come to me? Is that actually likely? And the answer is - not very.

To be fair, you can now report minor crimes - such as property theft - online.  I recently tested it out to report a bicycle theft, and it worked pretty well.  I answered a lot of questions and got a crime number. The next day a police officer rang me up and asked some more questions, and then sent me an email with another crime number. I didn't see anyone steal the wheel and I don't have any leads, so that is probably that. Still, at least the system works.


There is also a sign at the station showing how you can meet your local police officers, specifically members of the SNT (Safer Neighbourhood Team) at the Westfield library on various nights of the week.

But for most of us, we tend not to be in hurry to meet our local police officers for a general chat on certain scheduled evenings in the week. No disrespect to the SNT of course, it's just that most Londoners have busy lives and we only really tend to need the police when a crime has been committed.

So why exactly did they close the counter? It can't be that expensive to have someone on duty every day. Presumably on a slow day they could be getting on with their paperwork, or doing other administrative tasks.  Closing the counter makes the station feel like a barricaded fortress.

I can't help suspect that the much-trumpeted fall in crime in Shepherd's Bush has more to do with the greater difficulty of reporting crime, now that the station is closed, than it does to any any real fall in the level of crime itself.

What would be most helpful would be to re-open the public counter on the Uxbridge road, and let the public have direct access to their local police station. Surely local services work best when we can interact in person.

Plus, someone could spruce the place up a bit - maybe plant some flowers, or paint the building something other than battleship grey?

Anything that would make the police station feel a bit less depressing and unwelcoming.

The Bush Telegraph offers a personal view on life in Shepherd's Bush.  If you would like to contribute a story about our neighbourhood, email us at shepherdsbushblog@gmail.com.

Posted by The Bush Telegraph at 01:27