The Japanese Garden at Hammersmith Park has been significantly expanded, following works carried out by the London Borough of Hammersmith & Fulham, in association with the Friends of the Japanese Garden. A number of Japanese stone lanterns now line the Northern entrance to the park, and an ornamental gate has been installed. The project was financed by Japanese businesses and by the Japanese Embassy.


The Japanese Garden at Hammersmith Park is the oldest part of the park, and dates from the original 1910 Japan-British Exhibition. The Exhibition was heavily subsidised by the Japanese Government and, for many Londoners (few of whom could afford to travel) represented their first opportunity to witness Japanese culture and architecture.

A Japanese Garden Party and Festival was held in the Park in August to officially unveil the lanterns and gate.  To see what you missed, check out some of the images below. 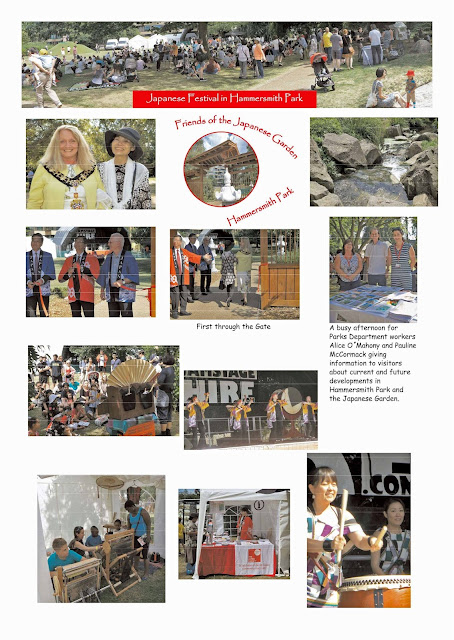 The Friends of Hammersmith Park hope that this celebration of Japanese art and culture will be an annual event - depending (of course) on funding.

Meanwhile, parks officers Alice O'Mahoney and Pauline McCormack are offering reassuring noises about upgrades to the childrens' playground, with tenders now out for bids, and the opportunity (soon) for the public to comment on the playground plans before they are finalised. Hopefully, they say, this means that construction on the new swings and climbing frames will start before Christmas.

The Shepherd's Bush Blog offers a personal view on life in Shepherd's Bush. If you would like to contribute a story about our neighbourhood, email us at shepherdsbushblog(at)gmail.com. And don't forget to leave your views in the comments section below.

Posted by The Bush Telegraph at 09:07