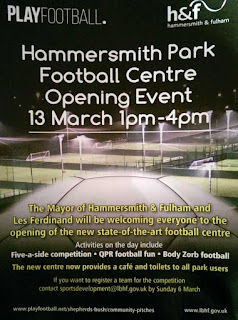 Play Football has opened its new football pitches in Hammersmith Park, after a long battle with local residents over the future of the park.

The event was not widely publicised, but you can see what you missed in the flyer to the left.

The new Five-a-side facilities include a cafe, and toilets which are open to all park users.

Hammersmith Park has been the subject of a long dispute over its future, after the last Council administration granted Play Football a long lease to operate a number of paid-for football pitches, at the same time removing the existing sports facilities.

Following a campaign by local author and resident Virginia Ironside, Pay Football's plans have been scaled back, with a promise to renew the tennis courts and also add a Multi-Use-Games-Area (MUGA). Hopefully, the resulting compromise will be an asset to Hammersmith Park, and not a liability.

Now, if we can just get The Council to sort out the depressing and under-invested children's playground at Hammersmith Park, it might actually become a nice place to visit.

The Bush Telegraph offers a personal view on life in Shepherd's Bush. If you would like to contribute a story about our neighbourhood, email us at shepherdsbushblog(at)gmail.com. And do leave a comment in the section below.