George Irvin's Funfair is Back 6-19 September

George Irvin's Funfair is a regular visitor to Shepherd's Bush. In recent years they have stayed for up to a full month, but following neighbourhood complaints our local Council scaled them back to 2 1/2 weeks.

The Trouble with Funfairs
The big lorries that transport the funfairs cause damage to Shepherd's Bush Green, which even at the best of times feels badly treated.

Councillor Sue Fennimore, of Avondale Ward, has actively engaged with residents' concerns in the past, and supported scaling back the funfairs.

Scars on Shepherd's Bush Green
The funfair lorries that bring in the heavy equipment lay down big metal causeways on the ground in order to transport their kit, but these kill off the grass and leave scars on the landscape.

Our Council doesn't seem to be able to insist that the funfair owners repair the damage they cause before they leave. The Council does put down fresh grass seed, but often it doesn't seem to take.  They cannot lay down turf because the turf gets stolen.

Local Councillors
If you'd like to let the Council know about your concerns, email your local councillors. 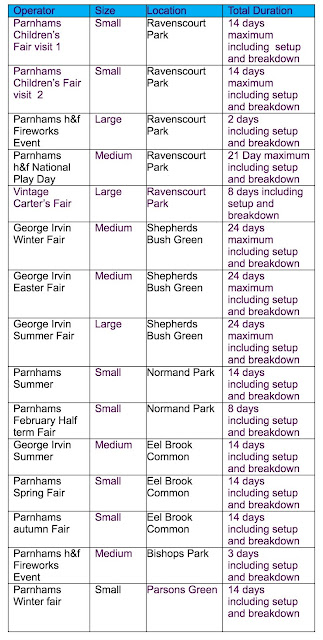 Is it all worth it? That rather depends on your point of view.

The Bush Telegraph offers a personal view on life in Shepherd's Bush. If you would like to contribute a story, email us at shepherdsbushblog@gmail.com. And don't forget to add your opinion in the comments section below.
Posted by The Bush Telegraph at 04:39