Recently LBHF ran a consultation over the continuation of the so-called "Shepherd's Bush Saturation Zone", the special licensing policy created by our Council in 2010 to restrict the expansion of licensed premises in an area which was already "saturated" with places to eat and drink, especially late at night.
The policy was an attempt by the Council to keep crime and disorder in Shepherd's Bush under control, but it appears that the Policy has now officially expired.
Shepherd's Bush Saturation Zone
In 2010 The London Borough of Hammersmith & Fulham decided to introduce a special policy relating to the "cumulative impact" of licensing in Shepherd’s Bush.

“Cumulative impact” means the potential impact on the promotion of the licensing objectives of a significant number of licensed premises concentrated in one area.

Shepherd's Bush Cumulative Impact Area
Shepherd’s Bush was identified by the Council as being "adversely affected in terms of the licensing objectives because of the cumulative impact of the concentration of licensed premises". In other words, too much booze in too small an area.  The Saturation zone included Shepherd's Bush Green to the East, the Uxbridge Road to the North, Goldhawk Road to the south, and was bordered by Askew road in the west. Outside of this area, normal licensing rules applied. 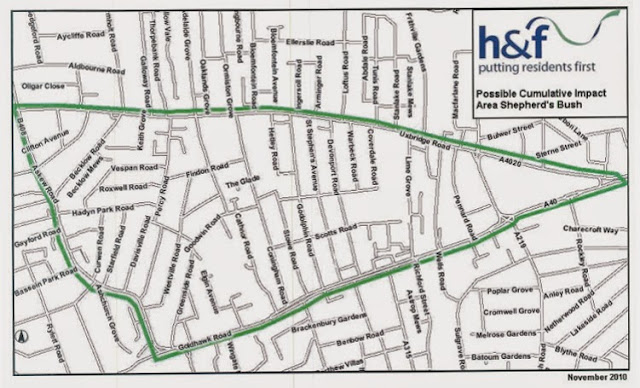 The cumulative Impact Policy was to be "kept under review" by the Council, but it appears that it has now expired.  Is this a good thing for our neighbourhood? Increasing numbers of restaurants and bars will now be tempted to apply for late-night licenses.  For most people in Shepherd's Bush, this probably isn't a good thing.
The Shepherd's Bush Blog offers a personal view on life in Shepherd's Bush. If you would like to contribute a story about our neighbourhood, email us at shepherdsbushblog(at)gmail.com.
Posted by The Bush Telegraph at 08:31