Last Chance to Have Your Say on Old Oak Plans

Now is the last chance to have your say on the future of Old Oak.
In the guest blog below,  Henry Peterson, advisor to the Old Oak Neighbourhood Forum, argues the case for why the current development plans are flawed - and should be opposed.
Old Oak and Park Royal Development Corporation (OPDC)
It is now six years since the Old Oak and Park Royal Development Corporation (OPDC) took over planning powers for parts of the Boroughs of Ealing, Brent and Hammersmith & Fulham.
Since April 2015, the Corporation has had its problems. It has stuck to its original and oft repeated script that Old Oak and Park Royal is the only place where HS2 meets Crossrail.  It is our task to use this opportunity to create a thriving new area in the city; somewhere people will aspire to live, work and play, and a destination people will return to visit time and time again.
Railway Station
This idea that a railway station sited north of Wormwood Scrubs will prove to be a ‘catalyst’ with a ‘transformational impact’ on West London is being increasingly questioned.
Claims that Old Oak will be the ‘best connected location’ in the UK are pushed by HS2 as well as OPDC. But ‘best connected’ for whom and in what sense? Plans to build new Overground stations at Hythe Road and at Old Oak Common Lane have unravelled since 2015, so this railway ‘hub’ will have no nearby links to London’s main public transport system.  So, ‘best connected location’ in what sense, compared with (for example) Kings Cross/St Pancras/Euston?
Cargiant 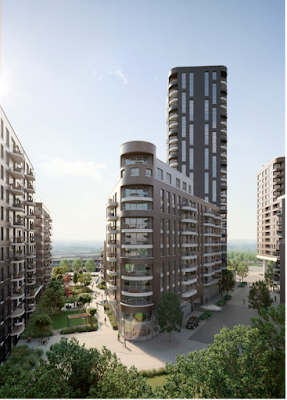 In late 2019, the Corporation had a major setback. The Planning Inspector examining its Draft Local Plan ruled that plans for 6,500 new homes on Cargiant’s 45 acre landholding were unviable. Cargiant had decided to stay on its site. Compulsory purchase of the land was beyond the means of OPDC, even with a potential £250m of Government infrastructure funds. So the £250m funding offer had to be relinquished. OPDC set off in search of alternative sites to meet its housing targets (25,000 new homes in the longer term and 13,700 by 2028).
Timetable for Completion: 2029-2033
Meanwhile the timetable for opening the new rail station slipped from 2026 to its current forecast date of anytime between 2029-2033. OPDC now proposes concentrations of new housing in East Acton (labelled as the ‘Western Lands’) and in Scrubs Lane.  Continued development of towers at North Acton, on schemes which LB Ealing decide under a ‘delegated arrangement’ with OPDC, makes up a large part of the 6,000 OPDC housing figure delivered to date.
These separate locations do not make for a coherent ‘new part of London’ as compared with Cargiant’s earlier proposals for ‘Old Oak Park’.  No new road connection between East Acton and Scrubs Lane/Wood Lane is planned, in the 2018-38 ‘plan period’.  The local road network, with its already congested north/south routes remains as is.  As a result of Cargiant abandoning its regeneration proposals, there is no feasible means of providing an eastern vehicle access to Old Oak Common station. The UK’s largest and most expensive station (£1.7bn) will have its single access point for buses, taxis and cars on Old Oak Common Lane.
Public Consultation Ends July 5th
The final round of public consultation on the OPDC Draft Local Plan, now running four and half years late, ends on July 5th. The Old Oak Neighbourhood Forum (in east Acton) and the St Quintin and Woodlands Neighbourhood Forum (in North Kensington) are trying to persuade the Planning Inspector that the whole Plan needs a rethink and a fresh start. The Friends of Wormwood Scrubs take the same view.
High Density Housing
At present, the OPDC Draft plan involves adding high density/high rise housing on every piece of development land that the Corporation has been able to identify. The ‘vision’ has turned into ‘more of the same’ and a relentless series of mainly ‘build-to-rent’ tower blocks as constructed in east London and on the South Bank. The first major housing scheme that OPDC approved is nearing completion and is being marketed as Oaklands Rise.
Developers - Genesis and QPR
The developers are a partnership of Genesis and QPR Football Club. The 2 and 3 bed apartments are available to buy with shared ownership, or to rent. The location is being promoted for its transport links, with the usual optimistic walking times to Underground stations (Willesden Junction and North Acton). If interested in locating to this development, pay no heed to the Genesis/QPR enticement that the HS2/Crossrail station is ‘coming soon’. It remains a decade away.
Noise, Air Pollution, and Traffic
As a feat of engineering, the ongoing construction of the new station is impressive. Less impressive are the levels of noise, air pollution, and traffic chaos around the station site, which will be experienced by residents in the area not just for months but for many years. 2021 feels s strange time to be setting in stone a 20 year plan for Old Oak, one of the last areas of relatively undeveloped land in London. If the station will not be operational until 2030 or later why not wait to see the impact of the pandemic on population movement, ‘hybrid’ working, and the type of homes people now want to live in? OPDC has a finite life as a development corporation. Ealing and LBHF councils will then inherit the consequences of its planning decisions.
Last chance to have your say
Local residents in Shepherds Bush and East Acton now have a last chance to have a say on what they feel about the OPDC Local Plan. The simplest way of responding is to email localplan@opdc.london.gov.uk. Or you can find the OPDC consultation website via https://www.london.gov.uk/about-us/organisations-we-work/old-oak-and-park-royal-development-corporation-opdc/get-involved-opdc/local-plan/submission-and-examination/local-plan-main-modifications-consultation
The deadline for comments is July 5th.
--- Henry Peterson, adviser to the Old Oak Neighbourhood Forum.  E: oonforum@gmail.com

The Shepherd's Bush Blog offers a personal view on life in Shepherd's Bush.  If you would like to contribute a story about our neighbourhood, email us at shepherdsbushblog(at)gmail.com. And feel free to disagree in the comments section below.

Posted by The Bush Telegraph at 04:22