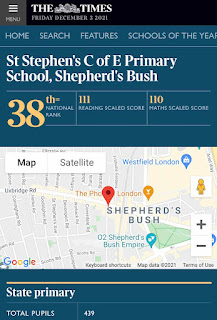 Parents at St Stephen's Church of England school are celebrating another great year for our local state primary - which has been ranked No 38 in the UK by The Times, placing it once again near the very top of the UK education league tables.
St Stephen's School is affiliated with St Stephen's Church, Shepherd's Bush and was built at the same time, circa 1849-50.
St Stephen's is led by the charismatic Michael Schumm, a much-loved head whose good nature and sunny personality gives the school its unique character.
FOSS
Parents are heavily involved in school activities and the Friends of St Stephen's (FOSS) raises prodigious sums to provide extra help for pupils, with a particular focus on one-on-one assistance for pupils with special needs.
Climbing the league tables
As of 2011 St Stephen's was rated "outstanding" by Ofsted. In 2017 it was ranked equal fifth in the Sunday Times list of the top 500 State Primary Schools in the UK and also featured in The Tatler's list of Best State Primary Schools.
It is worth pointing out that there are almost 21,000 primary schools in the UK.
Congratulations to Mr Schumm and his team on another great year.

The Shepherd's Bush Blog offers a personal view on life in Shepherd's Bush. If you would like to contribute a story, email us at shepherdsbushblog(at)gmail.com. And don't forget to add your opinion in the comments section below.

Posted by The Bush Telegraph at 12:37